When it comes to babywearing, we all have to start somewhere. It’s usually something that we’ve heard worked for a friend, something that was gifted to us with good intentions, or something that we could fit into our budget from a big retail store. It could have been a stretchy/gauzy wrap, a narrow-seated ‘crotch dangler’ (as the term goes), or even a kanga-pouch style shirt. For us, it was with a Balboa Baby adjustable sling, well known in the babywearing world as a closed tail sling style carrier. It was gifted to us by dear friends, and while I had never heard of one, I was less intimidated by it than by my Moby and it’s yards of fabric!

I remember the first time I put Alice in it. She was just 5 days old and we were going on a short walk to our mailbox, about 1/4 mile down a dirt lane. It was going to be our first time out of the house since coming home and we all needed some fresh air. As I put her into the pouch, cradle carry style, I remember my instant concern that she was going to suffocate. In the class that I had taken on car seat safety, it had mentioned multiple times about the dangers of chin-to-chest positioning and how it can lead to suffocation. Surely this wasn’t right! Maybe I was just doing it wrong. I Googled how to use it and sure enough, I was doing it correctly. So off we went.

I stopped about every 5 paces. It took us AGES to get there and back, because I was so worried about her not being able to breathe. About 200 feet from the front door I remember putting my arms under her, just like if I were carrying her. It was probably the last time that she went in it as a newborn. (I did try again later when she was about 3 months old, using it with a hip carry. However, adjusting it was not easy due to the elastic band around the edges of the carrier and that avenue was short lived.)

In between the duffle-style trials, I used the Moby and found that with a little patience and a lot of practice, it wasn’t nearly as difficult as I feared that it would be. We used it religiously until she grew too heavy for it, around 5 months old.

As scary as this looks, the pictures makes it hard to see that her head is up on top of my left breast, face tilted towards my sternum, and I have my hand under the edge of her bum 🙂 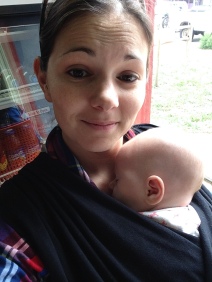 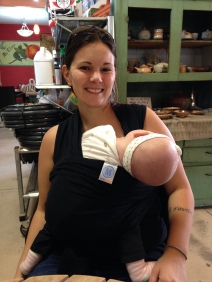 This picture is hilarious to look back on and remember- no matter what I did, how I tried to tuck her head in, she was determined to lay like this! 🙂

So, from there we graduated to our an Ergo SSC and that was our primary go-to for wearing until she was about 8 months old and I found a local babywearing group after we moved to a new state. That’s when I discovered wrapping and I have been smitten ever since! Now we try any type of wrap and carrier that we can get our hands on. It is fun and addicting getting to try all the new things, or rather many old world things with a new twist and spin! 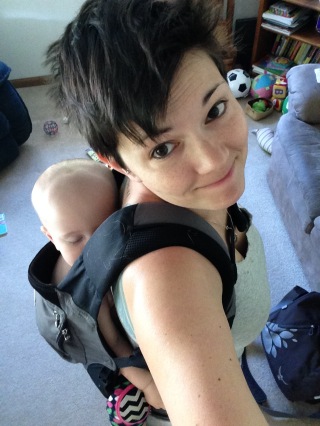 As an educator, I am now aware of so many things  that I was unaware of as a new wearer, things like the baby being Close Enough to Kiss and making sure that there is no chin-to-chest action going on. Those are things that I strive to teach caregivers everyday and I love helping making wearing easy and fun! After all, we have to start somewhere…. 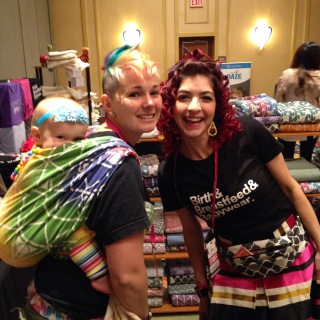 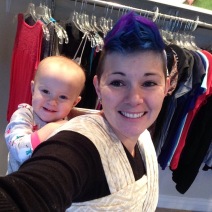