Design: The Boy Who Lived

Have I ever mentioned how geeky I am?! When I opened the box for The Boy Who Lived, I might have squealed (am I squealing at all boxes these days?? Hmm… must be getting good fluff mail…). I adore anything Harry Potter and this guy was no exception. I was also excited about receiving a black and white wrap; a neutral set of colors (shades and tints) that would go with any crazy outfit that I could throw together. And the ‘wrong side’? Get outta here! I think that I actually prefer the white background for most occasions; it really makes the black designs pop! 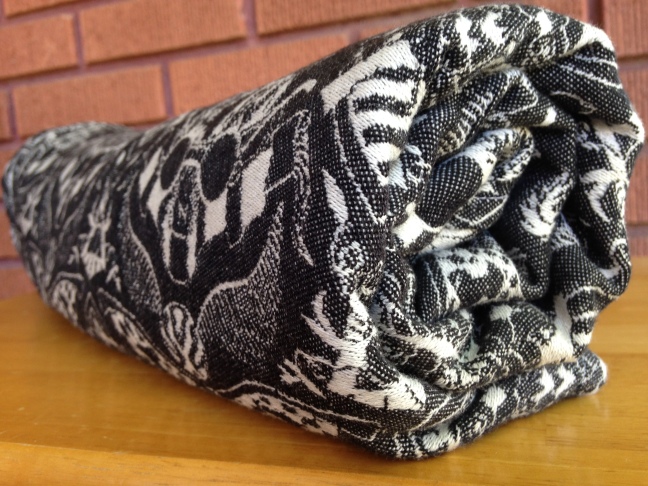 At a quick glance, TBWL can seem an intimidating pattern. There are multiple aspects to the design, each a significant part of the HP story. The description on the Risaroo Wovens website explains it best:

“This classic color combination is perfect no matter which House you are in! Inspired by one of our favorite characters, The Boy Who Lived was designed to include all of the details that we love about Harry Potter. This design is comprised of four different elements that pay homage to Harry Potter….Gryffindor House, Harry’s love of Quidditch, Harry’s beloved owl Hedwig, and the Deathly Hallows symbol.

Gryffindor is represented by the house crest and Gryffindor scarf. Harry’s iconic glasses and scar surround them. Quidditch played a big part in Harry’s time at Hogwarts, so we had to pay tribute to it in our design with the quintessential Quidditch goals, brooms, flags and Quaffles. The golden snitch is prominently displayed above the Quidditch design, as it is another iconic representation of Harry. Harry’s beloved owl, Hedwig, has a prominent spot in the design as well and is flanked by wands and Owl Post letters from Hogwarts. Last, but certainly not least, is the intricately adorned Deathly Hallows symbol.” 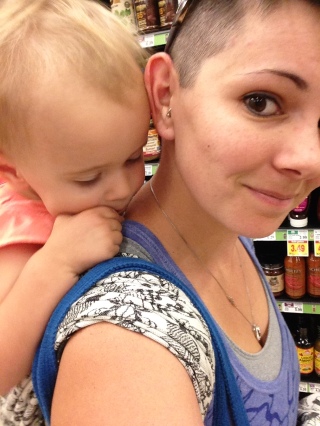 This wrap came to me well broken in, so I cannot make a from-loom-state comparison. What I can attest to is that once broken in it is VERY soft and floppy, like a well-worn blanket. It is thin in hand and folds or rolls tidily into a small space, such as a diaper bag or suitcase.

I was surprised to find after I had worn it a few times that this wrap is not in fact an all-cotton wrap, as I had first suspected (in my excitement, as always, I didn’t bother to look at the specs before I started using it!). Like its cousin Prism Iridis, it is toddler worthy, even in a single layer carry. However, unlike its cousin, the feel of the wrap both in hand and on the body are quite different.

Let’s do a little comparison here…

I find TBWL to have a more textured surface than Prism Iridis. It lacks that smooth, silky feel of its rainbow cousin and I feel that is because the pattern on TBWL is more complex, giving it an entirely different finish. It’s hard to describe the feeling without making it sound negative. Quite the contrary, in fact. It’s simply different, more like comparing the smooth hands of a pianist to the upraised grain/ridges of a board yet to be sanded. It sounds silly comparing such different things yet, I think that also shows just how hard it is to put the comparison into words.

I find that this texture difference make TBWL to have more grip than PI and less glide. I never found that I had a problem with slippage of any kind, nor did I find myself needing to re-tighten the wrap as our wanderings went on. It stuck to itself quite nicely, which meant that when creating a multi-pass carry I had to pull it well to tighten and get out any leftover slack or space that it may have created by grabbing onto itself. I enjoy wraps with grip like this for toddlers and bigger kiddos because a little more pulling and tugging is involved. 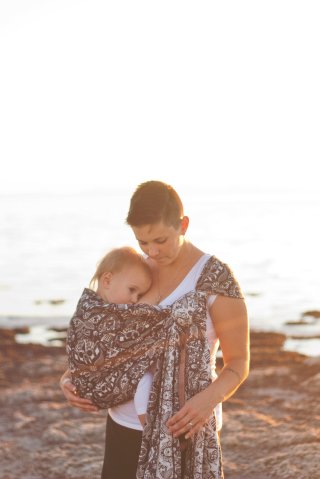 Knots for this wrap are a solid medium size and, thanks to the awesome grip, never, EVER go anywhere once tied! I did notice though, while doing a slip knot hip carry, that the combination of the weight of my toddler and gravity made it harder for me to move the knot up and down than I had anticipated and I found myself manhandling it a little. But once in place, it never once slipped on us! Tying a regular knot was just a matter of pulling it tight/pulling the slack past the grip, but I never felt like I was manhandling that into place. 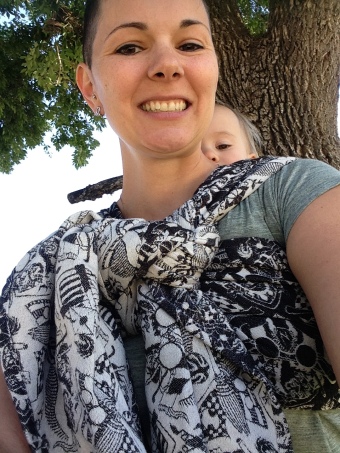 The shoulder feel is very similar to an all-cotton wrap: not super cushy but not uncomfortable either. We have been out and about for a few hours while up in this guy and I never found it to be diggy nor did my shoulders or back hurt. As with its rainbow cousin, it surprisingly lacks the typical spongy feeling of tencel. It has no lateral give and only about an inch & a half diagonal give, so we never had an issue with any sag or ‘gravity taking over’ as the day wore on. Another tencel masquerading as an all-cotton wrap!!  Yet while the ratio of tencel:cotton in this wrap is the exact same as with Iridis, I didn’t find it to have the same bounce/recoil, which surprised me immensely and has become a quality that I rather like in this particular wrap. This effect is quite possibly due to the amount of grip and texture that the wrap possesses (have I been saying grip a lot? Hmm… that must be important…).

I have really enjoyed having this shorty visit with us, as it appeals to both my geeky side and my practical need for something toddler worthy and not just another beautiful wrap. I’d say that this combo was a win!

** Note to the reader: For those who have read the article and looked through the photos, you may have noticed in the professional shots that my toddler looks wonky in them. She’s all hunched down and a little too far down my hip; the top rail is loose and the pass isn’t spread across my back correctly.

You see, what you don’t know is that she fell asleep on the way to the shoot, after her normal naptime and before dinner, so she wasn’t super stoked about being woken up.

What you don’t know is that in the bottom picture she is screaming her head off and I am trying desperately to make her laugh.

What you don’t know is that the slip knot hip carry wasn’t intended to be part of the photos but we nursed to help keep the tears at bay.

What you don’t know is that she refused to let me readjust her after she unlatched, that she just wanted me to hold her as is, all tucked up against me.

What you don’t know is that while I know I should have readjusted her, I just enjoyed each moment that I got to hold her snuggled close to me because I know that someday she won’t need those snuggles anymore.

But, being a parent, I know that you understand that…