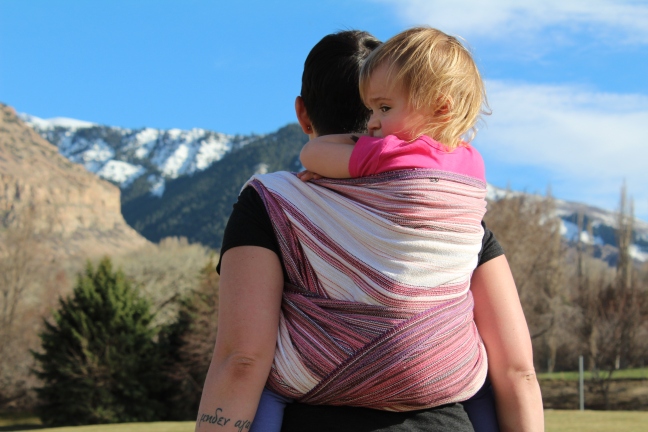 Color: ranging from purple to pink, to cream, with some chocolate brown woven in – cream weft 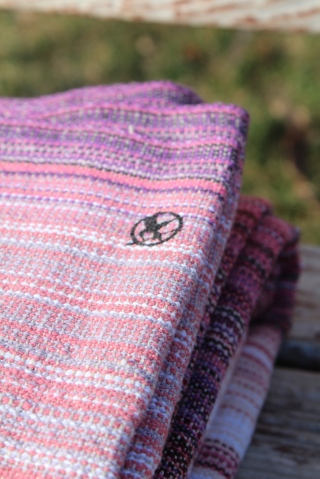 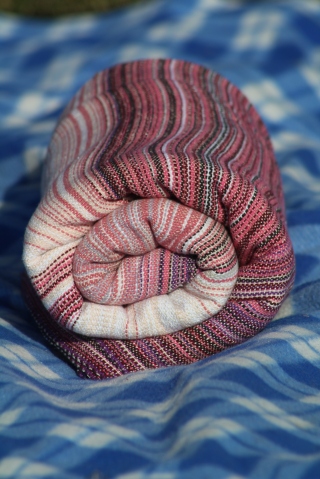 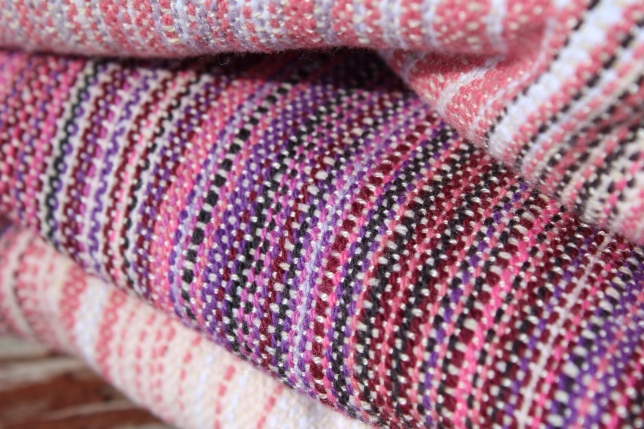 Pink is not generally a color that I reach for. I’ve always found it… too much for my taste. Hosting “Effie” may have changed that for me. The multiple pinks mixed with the creams and the purples really made me sit up and take notice of just how PRETTY pink is! While the cream softened it, the purples and browns really gave it some pizzaz! Subtle yet vibrant! Soft and strong. All the same qualities that really make up the character herself, don’t you think? Because let’s face it, Effie Trinket surprises everyone in the end!

I found ‘Ever in Your Favor’ to be soft in hand, though with more of a fresh, crisp feel given that I was at the beginning of her journey through the Districts. As the week wore on she really started to break in, and that process was smoother than I’ve seen with many fresh off the loom wraps. She wasn’t butter soft when she left here but she was well on her way and in quite the hurry! 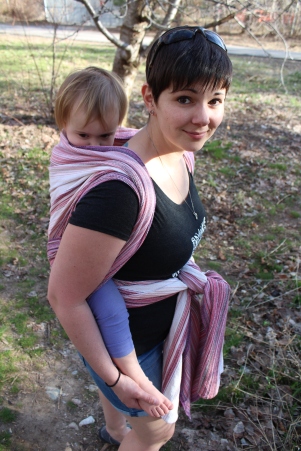 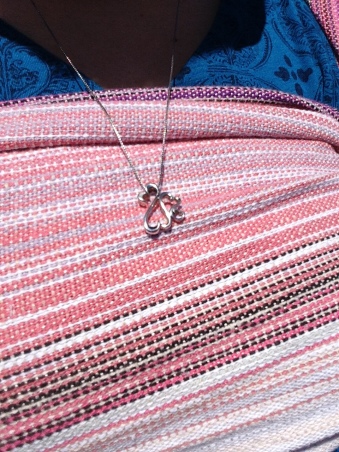 I found the plain weave to have a slightly bumpy feel to it that provided some simple, upraised texture. Surprisingly, it didn’t hinder the glide of fabric on fabric and pulling the passes over themselves for multilayer carries was not impeded by the grain of the fiber at all. There was just enough grip to hold the passes in place but I never found myself fighting with the material. In fact, it was very forgiving with any sloppy wrap job that I did in a hurry. Even if I managed to have a loose rail/edge, it never slipped out of place, under bum, or off my shoulder. And, thankfully, it never felt like Velcro! No matter how I tightened it, it never managed to cut off my breathing or circulation; it was never “too tight” (I have a wiggly toddler so I make sure to tighten well, and I’ve found that tightening chest passes & waist tie-offs can be uncomfortable in certain wraps; some things are more unforgiving than “Effie” was!).

Shoulder feel on both long and short endeavors – this was the question that really had me curious! Would the plain weave be comfortable with the toddler weight during short jaunts to the grocery store as well as on long walks outdoors? The answer was yes to both!! No shoulder digs at all, which I was frankly surprised about since the wrap is thinner than it looks in photos! The approx. 1 inch lateral stretch and the approx. 2-3 inch diagonal stretch provided a nice amount of bounce/recoil, and this really gave it enough cush on the shoulders to keep away the diggy feeling with an almost 30lb toddler! I felt no discomfort while wearing and had no red marks afterwards, which is generally a result of too much pressure on the shoulders, around the neck, and across the upper back when weight is not displaced properly across the overall surface. 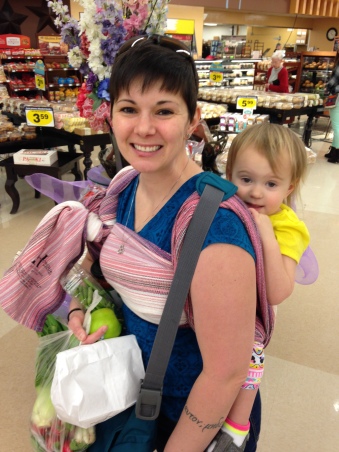 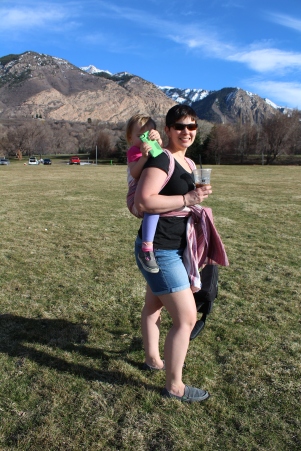 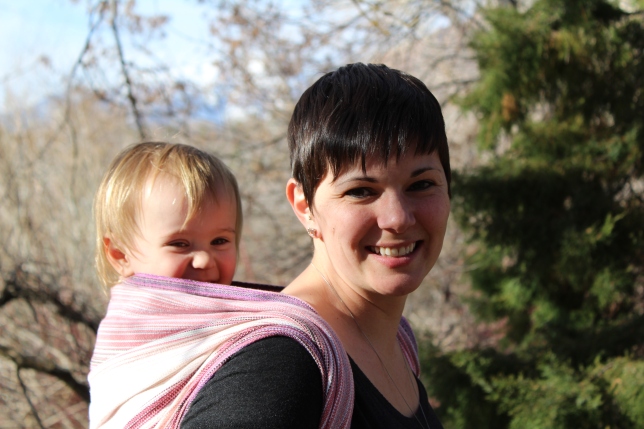 While I did my multilayer back carries with Alice, I chose to test out front carries and single layer back carries with Bumi the Weighted Doll. None of the above factors changed for me when I wrapped with a smaller, lighter wrappee; it was still light in hand and had great glide with just enough grip to make it both toddler worthy and newborn easy.  I feel that the thinness of the wrap contributed to it effortlessly pulling into a carry that would fit the smaller size of Bumi without a lot of extra tugging on the fabric to make adjustments. I chose to accomplish some spring cleaning chores/KonMari with Bumi hanging out in a FWCC and in spite of his plastic hands and feet sticking into me at odd angles, ‘Effie’ rocked the chore list! I even played with it in half knots part of the way through to gauge grippiness and never had a problem with slippage (disclaimer: half knots were tested with a weighted doll and not a real child- please always use a doubled knot when wearing your real babies!). 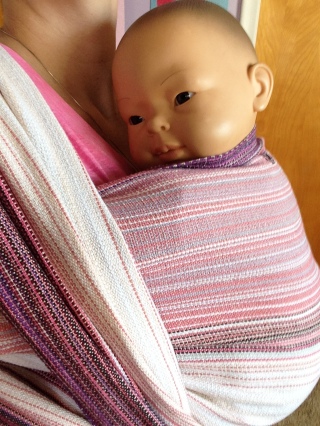 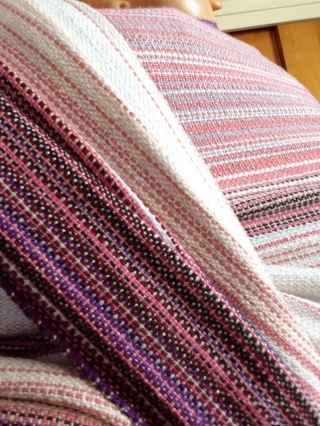 Speaking of knots, this traveler made beautiful knots!! I would place the size solidly within the medium/large column. I was able to pull them quite tight, to see how snuggly they could be pulled when putting a bit of strength behind it but, as previously mentioned, the texture provides enough grip to keep it in place with a simple double knot. Slip knots made a beautiful shoulder brooch that easily stayed put, though a medium knot in the shoulder can be large for those who prefer the ‘less is more’ approach to wearing. Since I prefer the bigger knots, I found them to be quite pretty and chose not to pull overly hard! I believe that Ms. Trinket herself would have been a big fan. 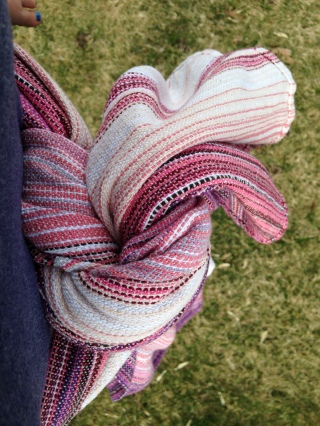 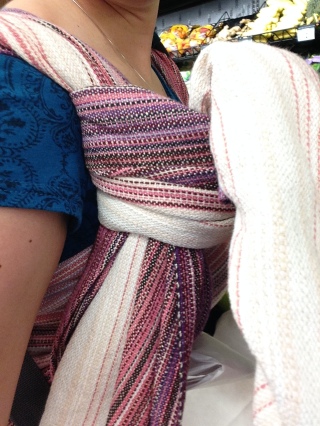 Overall this wrap was a joy to host! I find myself having a new appreciation for simpler weave structures with bigger toddlers, as well as a new appreciation for pink (especially given that Alice cried every single time she had to get down so I wore it often! I think it was definitely toddler approved!). I can see myself volunteering as Tribute often to host anything coming out of the Honour Hideout… 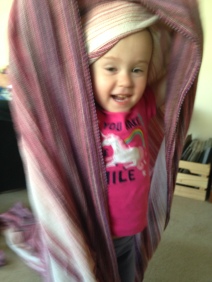 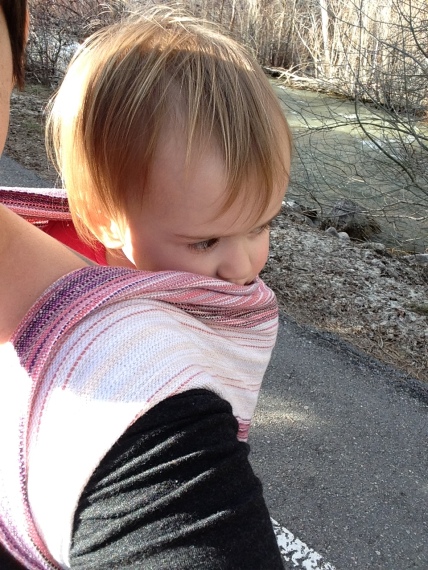 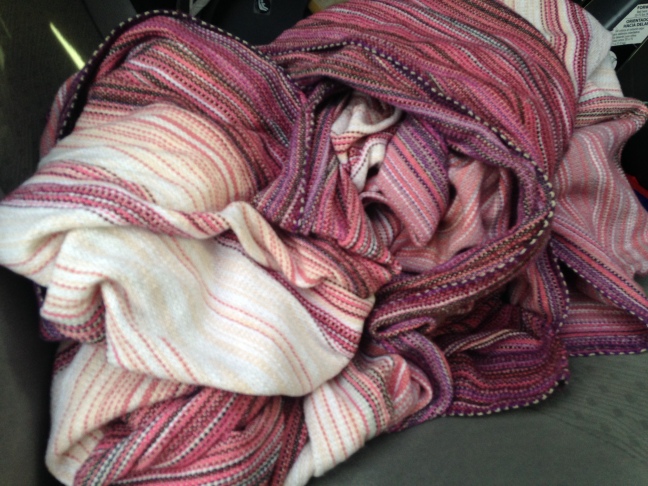